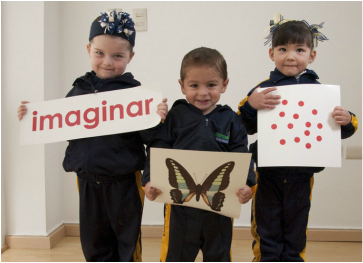 Since the mid-1950s, through his work with patients with brain injury, Glenn Doman and his colleagues began to discover the admirable brain’s ability to regenerate after an injury and its ability to develop through stimulation. After corroborating that a four year old boy with considerable brain injury was able to learn how to read, Doman could not stop wondering why healthy children, the same age, who could not do it. He soon realized that if children did not learn to read at an early age, it was not because they did not have the ability, but because they were not given the opportunity.
​
The book “How To Teach Your Baby To Read” was first published in 1964 and since then it has been translated to more than 25 languages. In this book, Doman introduces to parents an early reading learning program for infants and children under the age of six. Later on he’d write books on how to teach mathematics, general culture, foreign languages, music and physical excellence. Doman’s programs have been in place for more than five decades, and have been implemented by parents around the world.
In its original design, the Doman’s programs were tailored to be applied by parents, at home, to their own children since the child was born and throughout the child’s first few years. This way, the programs could be implemented with optimal duration, intensity, and frequency and in a loving and familiar environment. However, while there are differences in the program’s application and outcomes, it is possible to go back to the original Doman’s philosophy, re-design and improve it for the intellectual, physical and social development of pre-k children, and even for elementary education and junior high school children.

The adaptation of Doman’s methods for the school environment is what we call the Philadelphia Method. This adaptation has been developed and applied in our network of schools “Colegio Valle de Filadelfia” with Glenn Doman and the staff of the Institutes for the Achievement of Human Potential’s endorsement. For over a decade, we have enjoyed the adventure of teaching young children aged two or younger; delighting in the great timeless masterpieces of art and music. We have been amazed to listen to casual and friendly conversations between four-year-olds about the artistic skills of Van Gogh and Picasso.
Our hearts have been touched to perceive the notes of a Bach minuet produced by a restless five-year-old violinist as well as by listening the dialogue between two three-year-olds in one or two foreign languages. Each year we admire our students who complete triathlons demonstrating their physical excellence completing a triathlon that includes swimming, cycling and running since they are six years old, or when as of the age of eight students give a presentation to a large audience in either English or Spanish; the best part is to observe the ease and joy with which they learn. Quoting Doman again: “the magic is in the child.”
What do we need to fully develop our children's potential? There are only three things: committed and loving parents, trained and enthusiastic teachers, and that seed of genius present in every child which is evident in every pair of little eyes that open unceasingly through curiosity and wonder.
Each child has potential. An environment rich in stimuli, and opportunities, through an ambitious, fun, warm and well organized program dependent on us: parents and teachers. We only have one opportunity to give our children the best learning environment during their early years. Are we ready for that challenge?
Extracted from "La semilla de la genialidad", by Elisa Guerra, published in her blog Educación y Neurodesarrollo.